Sunni and Shiite: What's the Difference?
Persecution in the 21st Century 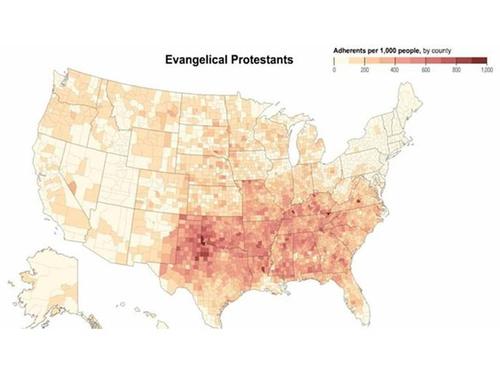 First let me say I don't like the term "evangelical."  I never use it for myself, and I don't recall anybody ever using it when referring to me. It has been used to marginalize and define people for political and / or popular media purposes.  Yet, the word is out there and is both descriptive and misused, so if you can't beat them, we'll join them for the sake of this conversation. An Evangelical is basically defined by two things: (1) They had a point in their life where they had a conversion to Jesus Christ, an experience that they can point to. (2) They believe the Bible. Even that second definition is variously defined within the movement.  But it is safe to say "Evangelicals are Bible believing converts to Jesus Christ." It has nothing to do with political associations or social activism.

As such Pat Robertson is certainly an evangelical, as is Jimmy Carter.  Ollie North by definition is an evangelical, as is Bono from U2. (listen to the podcast where he talks about his faith and inspiration.) Jerry Falwell falls into the category, as does Joel Osteen. Deion Sanders, George Foreman and Kathie Lee Gifford all register as evangelicals.  It's a pretty broad category, as the definition is pretty generous. Folks that have come to believe in Jesus and the Bible.  Evangelicals can be found everywhere as they live and work among us.  You won't however find too many in New England and the Northeast, as the Time Magazine map shows.

The Time Magazine map (from the "America turns 300 Million" issue) shows the number of evangelicals per one thousand people. The tan color (double click the map to blow it up) of New England shows less than 100 in 1,000 are evangelicals. People who converted to Jesus and believe the Bible.  George Barna shows similar statistics and has Connecticut at the very bottom of the barrel of evangelical adherents. We are 'dead last' with the lowest number of converts to Jesus in the USA!  Wow!

New England is a bona fide mission field with less than 10% evangelical. We send missionaries to countries with larger Christian populations than that. According to Patrick Johnstone of "Operation World" (who tracks believing populations around the world) countries with larger believing populations than the state of Connecticut include Guatemala with 23%, Nicaragua with 15.1%, Ethiopia with 13% and Zaire with 21%. Don't hear me wrong, we are responsible as New Testament Christians to send our people to fields abroad. But Connecticut is as dark spiritually as many fields we send missionaries to.   Read my friend Bill Lamorey's post about church planting / missions work in Connecticut.

It's not just Connecticut, although we are the worst in the country, but much of the Northeast is in a similar condition.  Here's some more statistics:

* Of the 86 largest metropolitan areas in the nation, those with the lowest proportion of evangelicals were Salt Lake City, Utah; Hartford, Connecticut; and Providence, Rhode Island.

* Involvement in an adult small group is most prolific in Shreveport, Louisiana. The three areas with the lowest rates of small group participation are Albany (NY), Boston and Providence.

* Adults are most likely to claim they have a responsibility to share their religious beliefs with other people if they live in Birmingham, Alabama. That perspective is least common in Providence and Green Bay.

* Believing that God is “the all-knowing, all-powerful creator of the universe who still rules it today” is most common in Tulsa. It is least predominant in Boston and San Francisco.

* One out of every six residents of Massachusetts, Connecticut and Washington are atheist or agnostic – nearly double the national average. Atheists and agnostics are hardest to locate in Louisiana and Missouri.

There are other areas around the country that have relatively low percentages as well, including parts of southern California. The difference there is the density of the populations. So while the percentages may be low, the numbers are high. Los Angeles County has a small percentage of Evangelicals, but because of population density has millions of them.

I'm not complaining.  But we do have our work cut out for us. It's appropriate for us to maintain a missionary posture and find creative and innovative ways to reach more people with the Good New of the Gospel of Jesus.

We've definitely got a lot to do, but God is good! Let's roll up our sleeves and let God do His creative and innovative work among us>

Look out Connecticut, here we come!

While polls and numbers are helpful tools, they are really only supplemental. Take for instance, my current location, I'm in pennsylvania. The situation here is vastly different, There is a church on every corner, literally, the town that I go to church in (Mechanicsburg) has five united methodist churches (there not very united). As you can see from the map there is not a high number of "evangelicals" but still almost everyone calls themselves a Christian. Having attended many of the churches in this area before finding The Calvary that I am attending now, i can attest that many of the Churches that the Christians here are attending, are not teaching very solid messages. My point... Numbers don't speak it all, its about fruit as well. I know that Calvary Montville is producing good fruit, and that the church is growing and teaching an amazingly Solid message.

Great post Joe! I really sense God is going to be doing some POWERFUL things here, and it's an exciting time to be in the trenches!!!

Mother Theresa said something awesome (didn't she always?) about reaching those right next to us:

"It is easy to love the people far away. It is not always easy to love those close to us. It is easier to give a cup of rice to relieve hunger than to relieve the loneliness and pain of someone unloved in our own home. Bring love into your home for this is where our love for each other must start."

Great post Joe. I agree with Andrew, polls provide numbers which may not be reflective of the truth. Example I look at Virginia on the map and my home town is the big red dot in the state but I was never approached in one on one conversation about the Lord or salvation. You would think it would be opposite, everyone and their brother would be evangelizing in the darker areas on the map.

Joyce, I love that quote- so true! Thanks for the reminder to be positive. If you don't make a point of being hopeful, thinking about the state of things around her could be downright depressing. But hey, I grew up lamenting the absence of Christian radio, and now I have WCSE. God is working in New England.

I'm not surprised by these numbers. I have worked closely with someone for the past 4 years. I figured she was a christian..but I never would have guessed that she once led a bible study group, until she mentioned this to me only last week. Ever notice how (at least in Ct) outside of church or any "christian fellowship" you mention Jesus or religion in any sense and people almost physically back away from you? Is it the way we share that makes people closed to hearing and seeing Christ??? Are we doing enough reaching OUTside rather than inside our 'social/fellowship' circles?

early in the year i went back to a recovery meeting that I had been absent from for about two years.I had no clue why God would put me there.I was going to church and studying the bible.This meeting was dead !for 2 weeks. I sat and listen and would share about how God had changed my life . I finally broke down and just cried and shared about what was going on with me that I was feeling powerless that sin was knocking at my door that I was a Christian that I was praying.I just cried... We dont cross talk at these meetings.so after a couple of other people shared this man began to share about his faith in the Lord. He looked at me and told me to continue to pray that he would pray for me and,not to sin.I knew at that very moment that God was present .We close these meetings with the Our Father Prayer.> Someone said that I should be kept in prayer.The believers came out ! and, the meeting has'nt been the same. Praise the LORD!

Jesus is our perfect example of a missionary. He came as one of us, relevant to us, dressed as one of us, speaking our language, relating to our issues. Who among us doesn't have issues that our neighbors can relate to? Let's start there. Or rather HERE.

The only difference between us and the guy across the desk/showroom/or whatever is ... we found the Better Way. We found the Eternal Hope. His name is Jesus. And in this terrifying, agonizing, lonely, struggling existence on this earth ... we found Joy. Peace. Truth. Hope.

How foolish (and selfish) to keep that to ourselves.

Thanks for this post Joe; it really got some great comments and discussion going. From talking to people during outreaches and their reactions to the name 'Jesus' and other uncomfortable subjects, this poll is exactly right. In other areas of the country you can usually start out with the fact that The Bible is true, and just have to get across to them that God is the author and not man; but list some fulfilled prophesies and you can move onto The Gospel. But around here people seem to be more resistant to The Bible, but that just means that I need to spend more time in His Word and become a better apologist for Him; and that's a good thing. I don't feel like I have the gift of Evangelism by any means, but I do love talking about the love of Jesus Christ. Either way, we are all responsible as "Christians" to try to fulfill His command "go forth", even if it just means replacing 'thank you' with 'thank you and God bless' at grocery stores.
Peace, Jeff
p.s. If anyone is interested in hitting the street and 'going forth' e-mail me at: Bergermeister321@yahoo.com

Look out Connecticut, here we come!

Thanks for the warning... I'll be sure to lock my door more often and start keeping a much closer eye on my kids.

I Love you girls