Christian Persecution in Pakistan
Al: Man of the Year

Amazing Grace at Woodstock and Other Weird A.G. Tunes & Facts 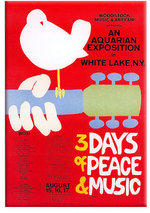 Amazing Grace at Woodstock?  What?!?!  Sure. Amazing Grace is played everywhere.  Funerals, Weddings, Folk Festivals, Live Aid and Church.  Arlo Guthrie performed it at Woodstock as one of his three songs.  One of the others was "Coming into Los Angeles bringing in a couple of keys (as in kilos of marijuana) don't check my bags if you please Mister Customs Man." Oh well... And you know Willie Nelson has performed it. It's as though Amazing Grace was written for his voice. Even Rod Stewart (You've got to be kidding!) performed it! It's an amazing song (pun intended.)

John Newton might not appreciate it, but some of us have discovered that his song, Amazing Grace, - the most recorded song ever- can be sung to a variety of tunes.  Today in our church we sang the song in its original form, and then I moved us to some more creative forms, including "The House of the Rising Sun,"  to the tune of "Gilligan's Island," and then my newfound arrangement of "99 Bottles of Beer on the Wall."  While goofing around with these together  somebody shouted out "Happy Birthday!" Combining the two seems too difficult on the spot, but when I got home I tried it.  Sure enough Happy Birthday works!  So does "For He's a Jolly Good Fellow," "Old MacDonald"  "The Brady Bunch Theme" and even to "Jesus Loves Me!" It's real kick.  What songs can you think of?

On serious side the song itself IS amazing! Here's the story:

"Early in 1748 he was rescued by a sea captain who had known John's father. John Newton ultimately became captain of his own ship, one which plied the slave trade.

Although he had had some early religious instruction from his mother, who had died when he was a child, he had long since given up any religious convictions. However, on a homeward voyage, while he was attempting to steer the ship through a violent storm, he experienced what he was to refer to later as his “great deliverance.” He recorded in his journal that when all seemed lost and the ship would surely sink, he exclaimed, “Lord, have mercy upon us.” Later in his cabin he reflected on what he had said and began to believe that God had addressed him through the storm and that grace had begun to work for him. (story taken from www.anointedlinks.com

Artists who have recorded the song

The hymn has been recorded by many artists over the last century. Two versions have made the UK Singles Chart; between 1970 and 1972, a version by Judy Collins spent 67 weeks in the charts, a record for a female artist, and peaked at number 5. In 1972, an instrumental version by the Pipes and Drums and Military Band of the Royal Scots Dragoon Guards spent five weeks at number one, also reaching the top spot in Australia.

I see I responded to your email about this blog too soon! You already have "Chris Tomlin" listd above. We sang his rendition at SoulFest. Nice! AND it's on his latest CD, See the Morning, a copy which just arrived at our book store TODAY -- and as always, will be sold at 25% off! (couldn't resist, in case anyone's heard me on the radio lately).
Blessings!

Crystal Lewis sang an incredible "Amazing Grace" on her Hymns album, and Chuck Smith is heard introducing her.

AG has special meaning for me. When my dear friend Bette lay dying of luekemia 3 years ago- only 41 years old- four friends surrounded her and sang Amazing Grace. Bette passed on verse 3- "Twas grace that lead me safe thus far, and grace will lead me home." Can't sing it without thinking of her now- happy and whole in Heaven.

AG has special meaning for me. When my dear friend Bette lay dying of luekemia 3 years ago- only 41 years old- four friends surrounded her and sang Amazing Grace. Bette passed on verse 3- "Twas grace that lead me safe thus far, and grace will lead me home." Can't sing it without thinking of her now- happy and whole in Heaven.

The song has made the rounds and has touched people's hearts deeply. It's one of the early songs I learned to play when I was learning to play worship songs. I stil love it, it is fresh everytime we sing it!

I was not correct in what I said about the Crystal Lewis CD...she does sing "Amazing Grace"...it is incredible, but the CD is called Best of the Harvest and it is also on The Bride CD...and it is Greg Lauri that is introducing her. Sorry 'bout that.

Snopes.com (an internet urban legend/hoax debunking site) actually has a more detailed story regarding John Newton ... about his slave trading, and his slow journey of surrendering his life to the Lord. I actually found the last statement full of hope, and a perfect example of God's "Amazing Grace":

"...Newton's story give us all hope — even the greatest of sinners can ultimately and meaningfully repent, and even the most half-hearted of conversions can over time work its magic."

You can read the full story here (it's worth the click!): http://www.snopes.com/religion/amazing.htm

On a side note, Jeff and I saw the Blind Boys of Alabama last month here in Cincinnati, and their "House of the Rising Sun" rendition of AG was indeed, well ... amazing!!

Just found another one this morning! Paul Colman recorded Amazing Grace also, on the compilation CD entitled "Bridges: Classic Hymns, Modern Worship", and I'll be playing it on the radio!

You're right Joe, Amazing Grace can be sung to the tune of '99 bottles of beer on the wall' ... Peace and happy Thanksgiving to all ... Jeff

Hey Jeff, Thanks for affirming that I was right about singing Amazing Grace to "99 Bottles of Beer on the Wall." I would love it if I was right about something other thanjust that, but I'll take it where I can get it! :-) LOL! The Zackinator http://www.themagicalstoryteller.blogspot.com/ let me know you can sing it to "The Brady Bunch Theme" as well!