Amazing Grace at Woodstock and Other Weird A.G. Tunes & Facts
Will the Real Jesus Stand Up?

Al: Man of the Year

Friday morning I was eating breakfast with Al Serino in a San Diego hotel when Steven Slosberg called my cell phone. Al and I were at a conference upgrading our skills and credentials to do disaster relief more effectively. Steve Slosberg has always been pleasant with me, but I discovered it wasn't really me he wanted to talk to (although he did ask me a few questions) but he wanted to talk to Al.  It was a kick to come home Sunday after church and read the column (reproduced below, with appropriate links) where Slosberg names him as his "Man of the Year."  I definitely agree with Slosberg that Al needs to get rid of that "Jesus Is a Red Sox Fan" tee shirt. Time for a new chapter on that one. Here's the article.  I added the picture of Al overseeing teams in a field kitchen in Bay Saint Louis, Mississippi right after Katrina hit. Enjoy! 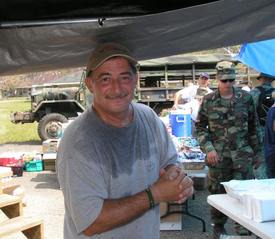 Tis the season for honoring people of the year, and I've found my man living out by Oxoboxo Lake in Oakdale, though he's been spending much of his time in the muck and ruin of the post-Katrina wasteland along the Gulf Coast.

If Al Serino were to accede to this conceit, and take a bow, he'd call it a blessing. In any event, he's out in San Diego just now, working to get his ministry certified and federally recognized as a disaster relief organization.

He'll tell you that his church, Calvary Chapel in Uncasville, where he is outreach pastor, and his Willing Hearts, Helping Hands ministry, do this hammer-banging and human-kindness intervention all the time, be it orphan support in Central America, dispensing food and water at Ground Zero after Sept. 11, or, where I got to know him, raising houses from the barren slabs and ashes in Mississippi towns essentially blown off the map by the water, winds and tornados otherwise known as Hurricane Katrina.

Albert J. Serino, who is 58, has the organizational qualities, the big-laugh temperament and the hands-on confidence. He can corral groups of volunteers, many of them hapless but earnest college students on spring or winter break, and keep them healthy and fed as they labor to do good. That he is a Massachusetts-bred Red Sox loyalist, the kind who offers no quarter, does not diminish — well, maybe a tad — his leadership gifts or innate worthiness.

Before moving to this region 15 years or so ago, Serino worked in management for General Electric and then as a consultant to troubled businesses looking for a turnaround. Here, he was a vice president for the former United Nuclear Corp. in Montville. His first wife, the mother of his two daughters, was killed in an auto accident when the children were young. Serino married again, and divorced, and lives today with his third wife, Amy, whom he married seven years ago. They moved to a circa 1930s cottage at Oxoboxo Lake three years ago, and restored it. They were in Niantic before that.

All of his work, Serino will tell you, is in praise of Jesus. Raised a Catholic, he was born again at age 40. His work, irrefutably, is inspired. After Katrina struck the Gulf Coast at the end of August 2005, Serino, in discussions with Calvary Chapel's senior pastor, Joe Paskewich, began organizing relief teams through the Willing Hearts, Helping Hands ministry, which the church created for such emergency efforts.

The volunteers started in a month or so later, housed, with other volunteer groups, on cots and in sleeping bags, and on the rare mattress, in the dank basement of a Baptist church in the Mississippi hamlet of Diamondhead, about a 45-minute drive from New Orleans. For the next year, Serino would spend at least two weeks every month in Mississippi, specifically in the Gulf towns of Waveland and Bay St. Louis, leading crews in the mucking out of vanquished homes, and then the rehabbing of those that were salvageable and the complete rebuilding of others.

Serino's church team solicited donations, tried to get big-box hardware stores to supply materials (the best he was offered, he says, was a 50-percent discount) and kept recruiting more volunteers. In the end more than 80 houses were cleaned out and made livable again by the Calvary Chapel crews, and, among those, 14 were built anew.

When I visited the Mississippi sites with a Calvary group in late March, I saw other decencies in Serino, such as offering a bed in the church to an itinerant plumber from New London, who'd overcome his troubles here and made his way south after the hurricane. He volunteered at housing sites in the evenings in exchange for his bed and meals. Serino knew him from here and trusted him. That meant as much to the plumber as shelter.

I won't badger you to take a bow, Al, for all that you and your crews did this year. But, please, at least change that wretched Red Sox T-shirt.

To read the article onliine or to hear Steven Slosberg read this article by click here.

This is the opinion of Steven Slosberg.

That's Great! Al really deserves this honor. Most great people go unrecognized. People never knowing what they did. It is great to see someone notice. Although, I third burning the “Jesus is a Red Sock Fan” t-shirt.

How blessed we are to have men like Al who step up to love God's people like that.

"That is what the Son of Man has done: He came to serve, not to be served -- and then to give away his life in exchange for many who are held hostage." Mark 10:45

Al truly reflects the heart of Jesus. He's an example of what being conformed to the image of the Son really means. Thanks, Al.

By the way, about the t-shirt? We all know that Jesus is a Cincinnati Reds fan. I know, I know, they stunk last season. But that's only because Jesus doesn't play favorites. And ya know, the last shall be first, the first shall be last ... ha!! :)

Wonderful article. God has definately gifted Al with compassion and evangelistic skill. God bless everyone who has gone down and helped in Mississippi. Our church has ended up in The Day quite a few times this past year, hasn't it?

Al is a great guy, beyond the wide spread service from Nicaragua, to New York, to Mississippi, he has touched lives on a personal relational level, thats even more important in my book, and that seems to be reflected in the Life and works of Jesus...

P.S. God is a Red Sox fan, hes a fan of the others too, but particularly the Red Sox... Thats just my opinion, but I'm probably right... heh...

Man, this "Jesus Loves the Red Sox" stuff is getting out of control! :-) Slosberg titles the article, "A Standup Guy Deserves to Take a Bow." Al needs to stand up, take off that tee shirt and send it to Steven Slosberg so that he can properly dispose of it! And he should do it soon! :-) Although, truth be known, he is in Mississippi again this week.

Wow! What an honor, and well-deserved! It's been such a blessing to have gotten to know Al and his wonderful family over these many years at Calvary. He just keeps ministering and serving, and joyfully so. (As I'm typing this, Al's voice came on the radio!)

But what's all this Red Sox stuff? Is everyone out there a Yankees fan except Al? Go Pirates!

Great article. The best part is the fact that Al will give God ALL of the glory and be grateful for the honor to serve Jesus, in His name ... We are truly blessed to have Al umong us.
Peace, Jeff

ditto great article ! Iron sharpeneth iron; so a man sharpeneth the countenance of his friend.Pro 27:17

There is no doubt that Al deserves the recognition for following the call of God on his life. Anyone who has met him has recognized his genuine warmth and love for Christ. We are blessed as a community of believers to be able to fellowship with him.