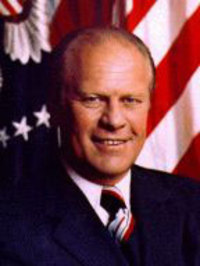 Was Gerald Ford a born-again Christian? By all accounts yes.

Ford grew up religious in Grand Rapids, Michigan, but as he moved into politics in his adult life most of that had subsided.

He did however make a genuine re-commitment to Christ, which he nurtured and continued into the presidency and continued after he left office.  It was Billy Zeoli, now president of www.Gospelcom.net (the parent company of Gospel Films) that helped Ford get back on track when Ford was a Congressman. Zeoli brought Ford a Bible, but he says it was at a chapel service for a Cowboys verses Redskins game that Ford recommitted his life to Christ.  Zeoli was involved in ministry to professional athletes. Ford shared with Zeoli a passion for sports.

When Ford became president Zeoli wrote a weekly devotional for him and conducted regular Bible Studies throughout Ford's tenure. Those devotionals are available in book form with an introduction by Gerald Ford in a book called, "God Has a Better Idea."

Gerald Ford's son Michael is today an ordained minister who attended Gordon-Conwell Theological Seminary in the Boston area. When his son graduated in 1977 Ford gave the commencement address and spoke of his own faith.  Ford also spoke at Wheaton College.

President Ford can be seen confessing his faith before thousands of young people by clicking the video embedded at the end of the text of the prayer of commitment reproduced below:

Gerald Ford: "I pledge my life recognizing I am no longer my own, belonging to God who has called me to lead the world.

I pledge my character, understanding that it is the cornerstone of leadership. I make God's word the final authority directing my motives and actions.

I pledge my service realizing I am chosen by God, not by men. I will give my life away to serve others.

To this end, I will stand for the hurting, the hopeless, the unloved. I will say what others refuse to say. I will reach the world without losing sight of the neighborhood. I will walk upright, speak the truth, and live above reproach. I will not be ashamed to fall on my knees, to cry out to God, to shed tears for the dying, to [live] a life worthy of a leader, to stand up and lead my generation that all may know that Jesus Christ is alive."  To see the video of Gerald Ford reciting this pledge click here.

That's so great to hear. Of course the news bits I heard didn't mention a thing about him being a born again christian, all I heard about was Betty's drug addiction problem and her center. Typical.

It will be so wild to get to Heaven and see who's there! And all of us in perfect unity. Wow. Sunday's worship was a lovely foretaste of what it will be like. Thanks so much for that. You must still be tired! God bless.

The commencement address in 77 was awesome!