Valentines: The Other Christian Holiday
Gonna Change My Way of Thinking 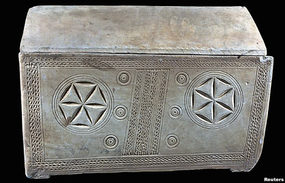 With Easter season upon us, we can expect the regular yearly articles about Jesus, the Bible and the Resurrection in the newspapers, the news weeklies and on television specials. The Discovery Channel plans on airing an investigation into whether they have now found the tomb of Jesus. -- More yawns! ---

The Good News is that Jesus is still attractive. 2,000 years later and people are still interested in Him. Of course! His is the only name by which people can be saved and there is a spot in the heart of every person that longs for Jesus. The real Jesus that is. But did they find the tomb of Jesus? OK, let's take a look!

Here are the facts on the ground:

* The documentary is produced by Oscar winner James Cameron, who is best known for his work on "Titanic" (the highest grossing film of all time.) Cameron was the one that conceived the "Terminator" series, which grew out of a dream he had of a machine that came from the future and out of fire to kill him.

* In his production, "The Lost Tomb of Christ" he draws attention to ten ancient caskets that were discovered in a suburb of Jerusalem in 1980. What?!?! 1980?!?? These things have been around since 1980?  Why hasn't anybody picked up on this before now?

* The BBC aired a documentary on the story and the supposed Jesus connection in 1996. The whole thing is old news and hasn't received any widespread support in any of the archaeological or academic communities. It's simply good controversy and it makes for exciting documentaries.

* Bar-Ilan University Prof. Amos Kloner, the Jerusalem District archaeologist who officially oversaw the work at the tomb in 1980 and has published detailed findings on its contents, on Saturday night dismissed the claims. "It makes a great story for a TV film," he told The Jerusalem Post. "But it's impossible. It's nonsense."

"There is no likelihood that Jesus and his relatives had a family tomb," Kloner said. "They were a Galilee family with no ties in Jerusalem. The Talpiot tomb belonged to a middle-class family from the 1st century CE."

Fox News quoted Kloner as saying, "They just want to get money for it."

* Academic Stephen Pfann, a scholar at the University of the Holy Land in Jerusalem, said he did not expect Christians to accept the film's findings.  "I don't think that Christians are going to buy into this," said Mr Pfann, who was interviewed by the film-makers. "But sceptics, in general, would like to see something that pokes holes into the story that so many people hold dear."

* Some Jerusalem residents are very excited about the find. "It will mean our house prices will go up because Christians will want to live here," one woman said.

* The Jerusalem Post reports, "The film also suggests that the so-called "James, Brother of Jesus" ossuary, which surfaced in 2002 in the collection of Israeli antiquities collector Oded Golan, may also have come from the tomb. The "James" ossuary made world headlines, but has been branded a forgery by the Israel Antiquities Authority..."

* Jerusalem-based biblical anthropologist Joe Zias goes a step further to discredit Cameron's documentary. "What they've done here," Zias said, "is they've simply tried in a very, very dishonest way to try to con the public into believing that this is the tomb of Jesus or Jesus' family. It has nothing whatsoever to do with Jesus."

* According to the filmmaker "the tomb of Jesus" may have come from the same tomb as the now famous "James Ossuary Hoax" which turned out to be a fraud ending in the arrests of five individuals trying to pull off an archaeological hoax in order to make money.

An AP Report tells us, "Archaeologists also balk at the filmmaker's claim that the James Ossuary _ the center of a famous antiquities fraud in Israel _ might have originated from the same cave. In 2005, Israel charged five suspects with forgery in connection with the infamous bone box."

* Darrell Bock, a professor at Dallas Seminary, whom the Discovery Channel had vet the film two weeks ago, adds another objection: why would Jesus's family or followers bury his bones in a family plot and "then turn around and preach that he had been physically raised from the dead?" If that objection smacks secular readers as relying too heavily on scripture, then Bock's larger point is still trenchant: "I told them that there were too many assumptions being claimed as discoveries, and that they were trying to connect dots that didn't belong together."

Everybody is jumping on the bandwagon. Time Magazine, CNN, FOX, the BBC. It's interesting that none of the major media outlets are really buying the story.

As we approach the Passover and Easter season, we're reminded again that Jesus did rise from the dead, a fact attested to in history. Many have tried to disprove it, undermine it or minimize. Yet the risen Jesus continues to change lives and save souls!

Finding the tomb? Well, the Bible tells us that Jesus WAS laid in a tomb. The Good News is He didn't stay there, but was raised in three days, never to die again. He tasted death for us, so that we could experience eternal life through Him.

For anyone really interested in the tomb of Jesus, read this paper by Dr William Lane Craig.  Jesus was laid in a tomb, but now He is gone.

My prayer is that James Cameron DOES find Jesus! What a joy that would be for him!

UPDATE: Scholars interviewed on teh special backtrack and no longer believe thie own claims.  Link Here: ____________

DOWNLOAD ARTICLE as a trifold for friends, family and co-workers here:

You're absolutely right, Joe. People have been trying to disprove the Resurrection since it happened. They can't. Let's pray they (and all others) find Jesus while trying to disprove Him. That's how Josh McDowell, Lee Strobel, C.S. Lewis and countless others discovered that Jesus is exactly who He said He is -- yesterday, today, and forever.

Joe quotes …."But skeptics, in general, would like to see something that pokes holes into the story that so many people hold dear."
More now than ever before! But more to the point, the prince of the power of the air would like to poke holes in every Christian’s faith and hope to nullify the effectiveness of the body of Christ. It seems as though the attacks to destroy individual faith continue to increase with frenzy. So now more then ever let us press close to our Lord and brethren with encouragement and tender heartedness. Remember, “Love hopes all things!”

Thank you for putting this post together, Joe. If Jesus is dead, how can He be so alive in my heart? How does He guide me, heal me, restore me? I've got my picture of me standing in the doorway of that empty tomb hanging here on my livingroom wall. HE IS RISEN INDEED!