Yawn! --- Finding the Tomb of Jesus?
The 2007 Easter Controversies

Gonna Change My Way of Thinking 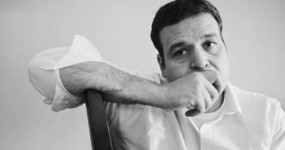 Several months ago I gave a book to all of our elders by Donald Miller called "To Own a Dragon: Reflections of Growing Up Without a Father."  It was unlike anything I'd read before. I got extra copies to give to other guys in the church as well. I got two reactions: (1) WoW!  (2) "What was I supposed to get out of that?" Well, Donald Miller had a huge impact on me and he has really helped me to love people more. And we all could use some more of that!

My sister posted these new assumptions by Donald Miller. You can read them on her blog by clicking here, or you can read them right here. She posted them first, so due credit to her at www.rejoycing.blogspot.com Cool name for a blog huh? re-Joycing?  Her name is Joyce!! So here are Donald Miller's "Shift Points."  I'm certain at least a few will speak to you as they spoke to me.  Enjoy your changed life!

1. Other People Exist:
Simply coming to the understanding that the world does not revolve around “me” but that everybody is having an experience, created by God, loved by God, and that we needed to repent of showing partiality.

2. Nobody will listen to you unless they know you like them:
We began to understand that people, subconsciously, merit a
religious or philosophical idea not on logical conclusions, but on whether or not the idea creates a “good person”…the definition of a good person being whether or not a person is kind to them, tolerant and understanding, able to listen without arguing and so on.

3. Nobody will listen to God unless they know God loves them:
We came to believe there was usually a hidden pain behind
hostility, that many people have been hurt by the church, or people or perspectives they believed to represent God. Many times it's as simple as an interview they saw on CNN, but an apology and kindness went a long way in helping people understand God was loving.

4. Other people have morality and values:
We came to understand that Christians do not own morality, that everybody lives by a moral code, not always informed by an ancient text, and yet it is there. Calling people or even thinking of them as immoral was, then, inappropriate. In fact, we often found that people who did not know Christ lived a morality close to his heart in many areas we had ignored, ie; community, tolerance, social justice, fairness and equality, freedom, beauty and so on.

5. Find common ground:
Often the morality of others overlapped Christian morality, and we came to understand that in these cases, we would focus on the overlapping issues. We came to see this as kindness, just as though we were on a date or making friends, we did not focus on what we didn’t have in common, but rather on mutual feelings about life. We would not say or do anything to combat people unless they knew we loved them, and this takes a great deal of time.

6. Define terms in their language:
We were careful about Christian sayings and phrases that might be offensive: Crusade, sin, immorality….we came to understand that concepts were more sacred than terms.

7. Telling somebody about the gospel is about them, not us:
We were careful not to try to “build our organization” and respected peoples freedom and space. Sharing the gospel became an exercise in friendship, rather than an attempt to grow a machine. Often, people feel used if they feel they are being recruited. The gospel, we learned, is really about them, their feelings about God and truth, about sin, about life.

8. Don’t let spreading the gospel feel any different than telling somebody about a love in your life, about your children or a great memory:
We realized that in telling somebody about Jesus, we were telling them about somebody we have come to love and need, and about something that had happened to us, an encounter. This keeps us from sounding preachy, and allows us to share part of ourselves in a friendship.

9. Include Lost People in Your Community:
Our organization was not exclusive. We invited non-believers into the community if they wanted to be invited. We were careful not to not be ourselves with them, but they were certainly invited and enjoyed being a part of the group. We explained terms that we used, what we believed, but other than that, continued as normal.

10. Apologize for what you represent:
We discovered that many people have been offended or hurt by what they perceive Christianity to be. We allowed ourselves to stand in the place of “Christianity” and apologize whenever necessary.

11. Be authentic:
We discovered the need to be as honest about our lives as possible. We did not feel the need to sell Jesus, as much as share what He has done in our broken lives. We had no problem sharing our doubts and fears about faith, along with our commitment and appreciation for what God had done.

12. Pray for the Salvation of others:
We discovered the need to pray for others. This would insure God was working in peoples lives, as we asked Him to. We discovered the work of evangelism is something God lets us watch, but very little of it is what we manipulate. We repented of not believing evangelism was a spiritual exchange between a lost person and God, rather than believing it was a series of ideas we were supposed to convince others of.

Hey, thanks for the reference to my blog. Cool!

I think that I'm finally beginning to get a grasp on what Jesus meant when he told us to take the log out of our eye before trying to get the speck out of someone else's. I'm learning to love PEOPLE -- not just be concerned about their souls, but to LOVE THEM -- who they are, just as they are, and just as beautifully and lovingly created by God as any of us. Just as loved and cherished and adored by God as any of us. People with thoughts and opinions and values and experiences as legitimate as any of ours. The "I'm right and you're wrong" approach, the attitude of self-righteousness, is neither right nor loving ... I've got a long way to go, but slowly, by His Spirit and example, I'm learning to love more like Jesus.

Joyce, You hit the nail on the head. It really is about learning to love like Jesus. I think many well meaning Christians, including myself, have at times past been so afraid of alinging themselves with sinners that we un-knowingly alinged ourselves with the accuser. God forgive us and take not your Holy Spirit from us. Restore your love in our daily lives.
FD

That's a great list. I've heard a lot of positive things about Miller's writings, I have to read something of his soon!