Gonna Change My Way of Thinking
Should We Teach the Bible in Public Schools?

During the seasons of Christmas and Easter (Easter more than Christmas) Jesus becomes a commodity. A way to sell advertising, magazines, drive people to television programs (which sell advertising) and even a way to drive people to art galleries, as we see this year with the display of "The Chocolate Jesus" (which has now been canceled. But Jesus is a powerful name and even with the cancellation the gallery and the sculptor as more well known than ever. Jesus can do a LOT of people and even galleries. Even when they aren't promoting the historical Jesus or the Savior.

Here's the ones I'm following and will have some remarks to make daily during "Holy Week" -as they call it- the week preceding Easter daily here on the blog.  Check everyday for a new article that you can talk about at work, with friends and family and to build you up in the faith that cannot be refuted! Or stopped!  Jesus rules! Still!

1) Time Magazine's cover article "Why We Should Teach the Bible in Public School (But very, very carefully)"

2) The Chocolate Jesus.  Hey let's face it, Jesus IS good. Way better than chocolate! Some artist, sculpted a life size, anatonomically correct Jesus out of choclate (not the one to the left, so the artist isn't even original) and was to display it at a mid-town mManhaattan gallery daily during "Holy Week."  Thankfully it isn't happening.

3) Anderson Cooper's "What is a Christian?"

I don't like CNN that much, but I tend to like the Anderson Cooper specials, so we'll see.  Wednesday and Thursday night @ 10:00. At least he's smart enough to not try and go up against "American Idol." 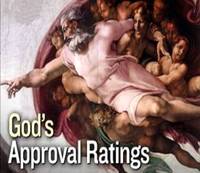 4) God's Approval Rating covered this week in Newsweek Magazine / MSNBC.  Believe me, God isn't sitting in heaven biting his fingernails hoping more people will vote for Him and believe in Him. But Americans are incurably religious. There is still hope for us as a nation!

5) "What's So Special About Jesus?"  will be the title of Easter Service. I'll post a trifold towards the end of the week that will be suitable to give to friends and family.

"What's so Special About Jesus" Hummm...sound like a great premise for a song. Oh and speaking of songs, didn't Madonna use an image of Jesus to promote herself in the "Prayer" video and again more recently portraying herself as Jesus on a cross? Jesus should be more than just the object of our worship. He should be the example of how we worship and the center of our worship.

Today we had a little homeschool Easter party here at my house. How great to see 7 children taking turns reading from the Bible, then singing, "Lord I lift your name on high." I showed them the picture of me at the empty tomb in Israel. Yeah, Jesus rules. He really does. Looking forward to these up-coming posts.

I understand where you're coming from, fleshdead, yet we who know Jesus and believe He is who He said He is should use these opportunities like the Madonna concert images ... not to condemn but to engage in conversation about who others think Jesus is. If unbelievers think Jesus is pretty special and worthy, even worthy enough to promote their art ... what an awesome opportunity to share how much MORE He is!

How do we do that? We start by loving and listening. Heck, we might even learn a few things!

Right on Joyce ! I attend a 12 step morning meeting and for years you couldnt mention God or Jesus.without having someone protest.Prayer's have been answered >>now the topic seems to always be about God and, Jesus. these folks are hungry ! It's been a blessing to watch and,listen as peoples lifes are being changed. Am so grateful to our LORD JESUS

FLESHDEAD --- I'm looking forward to hearing that "What's So Special About Jesus" song? We can post it here when it's done!

Joyce
I couldn't agree with you more. Anytime the world turns its eyes on Jesus is a great time for us to point to him. I remember that the musical "Jesus Christ Superstar was a catalyst for the Jesus Movement.