Jerry Falwell Dies
Who Would Have Thought Falwell & Larry Flynt Were Friends? 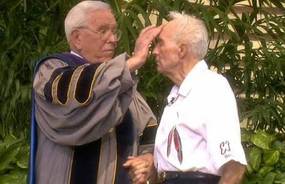 "I wanted to scream to the world that I am a born-again Christian!"  That's a quote form Evel Knievel a few weeks ago when his baptism lead to 500 people being baptized spontaneously after him.

Evel Knieval is America's Legendary motorcycle Daredevil. His motorcycle and memorabilia are displayed in the Smithsonian Institute, Museum of American History.

In September, 1974 he was featured on the cover of Sports Illustrated Magazine. He is listed in Who's Who and the Guinness Book of World Records as having broken 35 bones. There is a river in Arkansas named after him.

But something really wild happened to him during Daytona Bike Week in March. Here's how he described it, "I don't know what in the world happened. I don't know if it was the power of the prayer or God himself, but it just reached out, either while I was driving or walking down the sidewalk or sleeping, and it just—the power of God in Jesus just grabbed me. … All of a sudden, I just believed in Jesus Christ. I did, I believed in him! … I rose up in bed and, I was by myself, and I said, 'Devil, Devil, you bastard you, get away from me. I cast you out of my life.' … I just got on my knees and prayed that God would put his arms around me and never, ever, ever let me go."

On Palm Sunday he was baptized at the Crystal Cathedral in Orange County, California. As he was being baptized by Robert Schuller a spontaneous revival broke out and 500 people got out of their seats and were baptized as well.

What an awesome story.  Heaven is going to be populated by a pretty wild crowd. Eternity ought to fun! 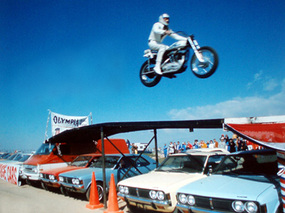 He was a jumping nut. Here's a list of some of the 300 jumps he made in his lifetime:

wow, wow, wow! Praise God. Imagine how many angels protected him, preserving his life for this time! I remember him. When I was little, I think he even had a Saturday morning cartoon. Anyone else remember that?

I remember growing up watching him jump and wondering how he ever survived. I think so many people could only wish they had the courage to step out and do something crazy--now they followed him and did something awesome with the baptism! cool!!

I stumbled onto your blog and am enjoying checking out your posts--great thoughts!

Yes, Janet, I think I remember the cartoon based on Evel knievel's exploits. I bet he prayed a great deal while in the middle of one of his jumps. I agree that it is a "wow" event, and am looking forward to hanging out with him in heaven.

I am sooo thrilled by his RAW and REAL testimony on the "Hour of Power". Praise God!!!!!! God has the power to change hearts, change lives. He changed mine!

Wow. Fast forward to today, November 30, 2007. Evel is now in the presence of his Savior! What a testimony!