Who Would Have Thought Falwell & Larry Flynt Were Friends?
Memorial Day Tribute

Lots of Christians on American Idol 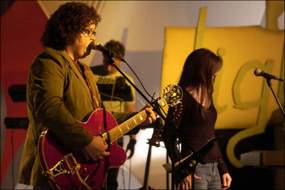 American Idol has had its share of Christian contestants on it. This season is no exception. Kind of a strange name for a show with a bunch of Christians on it, but they are there in abundance, including a worship leader at his local church. Chris Sligh.  Chris is an alumni of Bob Jones University (not your usual bastion of contemporary music) and the worship leader at Seacoast Church in Greenville, South Carolina. He also has his own Christian CD out with his band "Half Past Forever."  Chris sang songs by DC Talk and Mute Math on American Idol.

Melinda Doolittle attended a Christian College associated with Southern Baptist Convention and has sung backup with several Christian artists, including Anointed, Grammy winner Jonny Lang, Mandisa (who was previously on American Idol,) and CeCe Winans. Melinda has been really vocal about her faith on the program and has mentioned that she has her "Jesus Music" in her iPod. She mentioned Fred Hammond as being one of the inspirations that she is presently listening to.

17 year old Jordin Sparks is from Calvary Chapel in Glendale, Arizona. She has previously been quite vocal about her faith as well. She told the Gospel Music Association, "I want them (non-believers) to know that God loves them, Jesus died for them, and that God has a plan for their life. I want them to see and hear that being a Christian and singing about it isn't weird!" 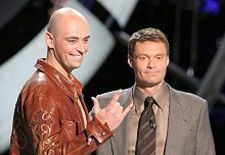 Phil Stacey, before joining the Navy was a worship leader in his church associated with The Church of God.  He attended Lee University a Pentecostal denomination. Phil's father is a minster, as was his grandmother.

Lakisha Jones this season has also been vocal about her faith. It has been a season with a lot of Christians with vibrant testimonies on the show. We'll see who wins later this week.

That is so cool. You could really tell that some of them were Christians. I was rooting for Melinda, but now I'll root for Jordan.

I'm SO glad Jordin won! She's a strong Christian who has toured with Michael W. Smith. The Buzz around AI this year was that it was a very close-knit group who didn't hide their faith. By my count, six of the final 12 were solid Christians.

While I'm happy Jordin won, I feel a burden to keep her in my prayers as the Industry is one that can rob someone of their soul. I would hate her to turn into another Britney Spears. I pray that she holds strong to Jesus and keeps her feet on the ground and her eyes on Him. She can be a huge witness and voice in a securlar industry. God protect her!

I know a lot of people are praying for Jordin. The industry is brutal and she is young. She has been around quite a bit already, so she may be a little savvy. She was recently in an ad as a model in 17 Magazine. Here's another article on her in her local newspaper.
http://www.azcentral.com/community/westvalley/articles/0118gl-glenidol18-ON.html

It's great to see all these Christians that were on the show... and will be going on tour this summer... Let's pray they'll get to choose some of the songs they'll sing that will have the message of Christ in them as some of them did on the show... BeBe and CeCe Winan's on the final show with Melinda was a nice touch, maybe the first time a Christian music icon has been on the show.

Melinda Doolittle the talented vocalist with a heart of gold. The album’s first single, “It’s Your Love,” was released to radio stations nationwide in September. Keep you update about Melinda Career at www.melindasbackups.com

Thank you for letting us post about our favorite singer. Without this site, it would be really difficult to share the latest news about them.

FREE SONG FROM AMERICAN IDOL'S MELINDA DOOLITTLE! GO TO www.melindadoolittle.com and get it NOW - FREE! New album released on February 3, 2009! Don't miss it!