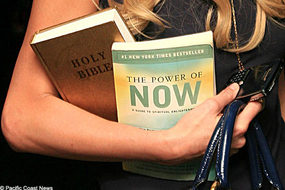 Has this blog become a tabloid gossip column? That's the REAL question!

It's a blog about everyday interactions with God in daily life and popular culture. So, if somebody visible is talking about God it's fair game.

Prior to her sentencing Paris Hilton was spending a lot of time with her mother and seen around Los Angeles with a Bible under her arm. (The included picture is Paris carrying the books in L.A.) She also was carrying the book, "The Power of Now," a New Age tome on mysticism, integration and inter-personal relationships. Some think that carrying the books was just one more show, but hey, the Bible is the Bible.

The Bible she is carrying looks like a stolen Gideon's Bible from a hotel room, but I'm sure the Gideon's aren't too bothered by stolen Bibles. Maybe they want people to take the Bibles.  Any Gideon's out there know the answer to that?  Maybe she got it from one of the Hilton family hotels which also include a book by Conrad Hilton, "Be My Guest" in each room. In any event, she has a Bible and has been carrying it around! Not to mention that Gideon Bibles include an invitation to receive Christ in them.

On Sunday Paris Hilton told Barbara Walters from jail, "I'm not the same person I was," she said. "I used to act dumb. It was an act. I am 26 years old, and that act is no longer cute. It is not who I am, nor do I want to be that person for the young girls who looked up to me. I know now that I can make a difference, that I have the power to do that. I have been thinking that I want to do different things when I am out of here. I have become much more spiritual. God has given me this new chance." She continued by saying, "God,has released me."

I don't think that we should go around proclaiming Paris Hilton as the next evangelist, especially considering we don't even know what she means when she says "God." Even if she has found God, she has a long path in front of her. She certainly doesn't need to be spokesperson or authority on spiritual life. Whether she has truly turned to God or is in the searching and seeking stage this is a great time to pray for Paris Hilton, because let's be honest when was the last time you prayed for Paris Hilton.

What her interest in God, even if just for the moment, shows us is that people are hungry for reality, for something beyond themselves and that when everything else is taken away, we do know that there is a God.  Under it all everybody knows this.

Pray for her and know that people need God. We can be a lifeline and a connection to God for hungry souls.

Posted at 11:54 AM in Church Big "C", Conversion Stories, Evangelism, News, News From a Fallen World (A.K.A. News of the Bizarre), Pop Culture | Permalink | Comments (9)

I do pray she would find Truth and maybe some "time out" in jail will help her focus. God say's His Word will not return void so if she has read some of the Bible I do pray that God would use it to draw her to Himself. God is pretty amazing if He can save mass murders than He can save an heiress!

Wow, that's interesting, Joe. I sure didn't hear that on the news! Good thing we have paskewich.com! I will pray for Paris. She's mostly getting lots of hate and jealousy directed her way- the world laughing at her downfall.
mega-convicting sermon yesterday, by the way. I hate that. But thanks:)

Okay, Joe. My first thought was, "I don't want to pray for Paris Hilton!" Then I heard, "Pray for your enemies." Enemy? Paris Hilton isn't my enemy!! But then I realized . . . I HAVE thought of her as an enemy!! I've thought of her as an enemy to my daughter and to all young girls. Convicted!! Not Paris in jail, but me in my spirit!! Yikes!! So, I sincerely prayed for her and asked for forgiveness for me. Gee, this is just like "I've Screwed Up.com!" I feel better. :o)

I am praying that Paris Hilton did find God. It is hard to know by just what the media reports; but it looks like it could be true. The new-age tome she had with her in the picture wont help her much. Let's pray that she loses it and is left with her Bible to read. She needs prayer, too, in light of the feeding frenzy that is underway in the media. Public life has its' potholes...

Do you really want Paris to be at he top of your blog?

What's SDG? Paris Hilton at the top of the blog? Might as well be at teh top of our prayer lists. Probably not that many people for her... A lot of Christians are mad at her for being such a bad of example to young girls. Can't say I blame them in a way. But, Jesus loves her and she isn't beyond the reach of a strong hand of love. Sounds like she is having some revelations of life in the prison... Keep praying for her, she would defintely be a fun sister in the Lord to have!

Every person has infinite worth and value, Zach. Paris Hilton, too.

I think the difference in seeing her on this blog and anywhere else in the media is this -- here, we are prompted to pray for her. Everywhere else, they simply prey on her.

So if it means keeping her here for a while so that we can put our biases and preconceived feelings aside and look at her with Jesus' eyes, with compassion and love and pray for her, that seems like a pretty good thing to me. Hopefully it will prompt me to remember to see all others the same way as well. Worthy. Valuable. Loved.

SDG stands for the Latin phrase "Soli Deo Gloria" which means "To God alone be the glory".

Wow- imagine people scrutinizing whether each of us really has "found God" or not. Or our walk before we knew God. I am sure many a person has d me and the sunami's caused by my life before and unfortunately even after Christ took my hand and said walk with me and I took one step then another stumbling alot along the way.
My s and I look at Paris with tears in our eyes - tears because she is like a sheep without a Shepherd . May God's heart enlarge ours! I know mine sure needs to make a lot more room for people, it is so small.