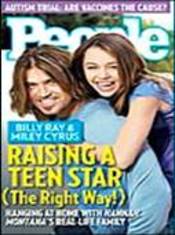 As we sink deeper into the mire of the Christian gossip column... This just in: "Lindsay Lohan Finds God in Rehab, and is going to church." Or so says her dad, who is suing her mother for support after the breakup of their marriage. She says all he wants is his daughter's money. He says he just wants his investment. He has also been seen around the Hamptons showing up for photo-ops.

Lindsay Lohan's friends report that she will not be spending her 21st birthday at Pure in Vegas as originally planned, but will spend more time at the Promiseland Rehab in Malibu.  Are Paris Hilton and Linsey Lohan really finding God?  Maybe. Rehab is a great place to find God, and if you want the 12 Steps to really work, you need to bring God into the equation.

A lot of people don' t know that the original 12 Steps of AA came from the Bible and a Bible believing group, but that's fodder for another post on another day. However it shakes out, it tells us that people deep down inside know that they need God. Maybe when better times roll around they will forget the need they felt inside and feed their hunger another way, but people definitely have a God shaped hole. Pray for these girls.

Or....  do like Billy Ray Cyrus, who tries to use the antics of Paris Hilton, Lindsay Lohan and Brittney Spears as lessons for his own Hollywood daughter Hanna Montana.  Billy Ray became a Christian some years back and his kids are trying to serve the Lord as well. Here's some excepts from a recent article in People Magazine:

Billy Ray Cyrus is crossing his fingers that his daughter, "Hannah Montana" star Miley, won't go the way of Lindsay and Paris and Britney. He even shows her articles about the Hollywood troublemakers as cautionary tales. 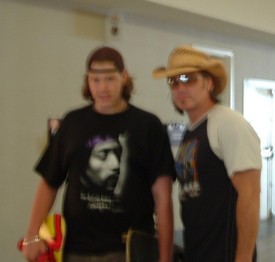 "The biggest phenomenon in all this is that the kid's been able to keep her head on her shoulders," the 45-year-old country singer tells People magazine in its new issue. "She hasn't flipped out. I'm going to knock on wood."

He adds: "I pray every day she can stay on that path."

Cyrus, who recently completed a stint on ABC's "Dancing With the Stars," co-stars with 14-year-old Miley on the hit Disney Channel series "Hannah Montana," about a country-girl-turned-pop-star who tries to keep her celebrity life a secret from her classmates.

"We're really close," she says. "I feel like I can tell my dad anything. When we come home, we forget that we even work together and just hang out."

The picture above is of Billy Ray Cyrus with my son Stefan. Stefan is carrying his Tony Alva Skateboad, Billy Ray is carrying his guitar. They both have on "Rock tees." Stefan with Jimi Hendrix and Billy Ray with the Doors. Are those Christian groups?

I don't know...that pic of "Billy and Stephen" is kind of out of focus-- like one of those Loch Ness monster photos. You sure it's not you in big sunglasses and a cowboy hat, Joe?
I like this post. Sort of relates to the whole "in the world, not of it," thing. Our teens ARE in the world. May as well look around at what we see and talk about it.

I almost bought that People mag just because of that article! Wel being that we are on this subject let me reveal (at the cost of being laughed at!) I often pray for Tom Cruise and I used to dream about working for him as their nanny ( it first started before he left Nicole) so I figured maybe God wanted me to pray for him......I don't know, they need somebody to pray for them why not us?

Ha! No that isn't me in the cowboy hat! It is definitely Billy Ray and Stefan in 2005. Stefan was taller than him then! It is a lousy picture, I took it. I have two of them, maybe I should try the other one... He IS nice guy, we used to watch him on Doc. His other daugther is involved in a Nashville company that sends independent Christian music to our radio station.

That's not Joe. He isn't that buff! Haha!

Larry Norman www.larrynorman.com -the original Christian Rocker- used to wear a Rolling Stones button all the time. When asked why he said it was a prayer and a reminder to pray. Why not pray for celebrities? Jesus died for them as well. The more we pray in the general the better. What think thee?

What a coincidence I saw this article on my Yahoo homepage: "Germany has barred the makers of a movie about a plot to kill Adolf Hitler from filming at German military sites because its star Tom Cruise is a Scientologist, the Defense Ministry said on Monday." The whole article here: http://movies.yahoo.com/mv/news/va/20070625/118279999700.html Very interesting they refer to Scientology as a "cult" ! At least the German authorities get it!

I'm not quite getting the connection you're making here, April. If it's to pray for Tom Cruise that his eyes be opened and meets the One True God, that makes sense. But I'm not sure where you are coming from here.

I have to admit that Germany banning moviemakers from filming because of Tom Cruise's religious affiliation scares the crap out of me. The possible implications of "What's next?" is a frightening thought. What happens if Mitt Romney gets into office and Germany cuts off all political talks and/or negotiations because of his religious affiliation? What religion is next to be banned in whatever arena for whatever reasons?

What exactly is it that Germany is "getting"? Hitler thought genocide was the answer to Judaism. For the German authorities to think that Tom Cruise isn't fit for the role or that they don't want the movie filmed period is acceptable. To bar them because of one of the actor's religious affiliations is chilling.

What's next? Who is next?

I love this blog! The dead give away that it's not Joe in the photo isn't the arms or the hat, it's the sunglasses!

'scuse me while I kiss the sky,

Please don't learn from that free of mind girls.