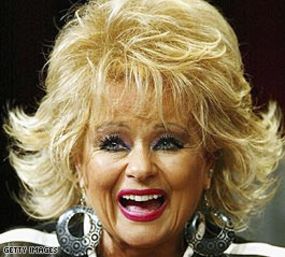 Tammy Faye was a hope broker. She is a hero and a role model for me. I can only dream that I could help as many people as she has with her (to quote the Charlotte Observer obituary) "can-do Christian cheer."

A lot of Christians made her life miserable and left her when she was down. But she seemed to move right past it. It was interesting to me that when she died her family contacted Larry King. He had an awful lot of respect for her and let her talk freely about anything she wanted to talk about.

A few years ago I read an interview with Tammy's son Jamie (who goes by Jay,) who heads up a wild ministry to folks on the extreme edge. Jamie is on the edge himself. At the time his mom was involved in some pretty peculiar work for the former wife of one of television's best known evangelists. She was on the WB reality show "The Surreal Life" with Vanilla Ice and former adult porn star Ron Jeremy.  Her son Jamie - who was embarrassed by his mom - told of trying to convince her that people were watching the show and laughing at her. She told him she didn't care, that she loved these people, that they were her friends, and that Jesus loved them and she wanted to be the one to tell them. Jamie Bakker said after listening to his mom explain it all to him she went from being an embarrassment to him to being his hero. That's when she became a hero to me as well.

Around the same time and after the release of the documentary "The Eyes of Tammy Faye" which chronicled her life, she became a sensation in the gay community. That raised my eyebrows, so I started to read about what her role was there. Turns out they were inviting her to preach! But mostly she just loved on them. She preached at AIDS events and became loved by gay men across the nation. I read one of her sermons to these gatherings and it could have just as easily come across Billy Graham's pulpit. She reinforced how much she loved these guys, how much Jesus loved them, how much God despised sin, and how she was pleased to give a kiss and a motherly pull on the cheek to everyone of them. You go girl! I cried after reading the accounts and asked God to help me love everybody as much as Tammy Faye did. Maybe someday I'll love people with the fervency Tammy Faye had for people. Maybe someday. Maybe.

Tammy Faye grew up in northern Michigan in a family of eight kids in a house without running water. Her and Jim were Assembly of God kids that met in Bible College and wanted to share the message of Jesus far and wide. They started out doing puppets, which they eventually did for a budding television program that would become known as the 700 Club. They started out small and grew huge.

It might be fair to say that success became their downfall, except that they didn't stay down. Both Tammy Faye and Jim bounced back with a love for people and a message of hope for the ordinary person.

I had the privilege of meeting Jim Bakker a few years ago right after he got out of jail and wrote a book called, "I Was Wrong."  He was broken, sincere, kind, gentle and had all the time in the world for me. I was embarrassed, humiliated and felt a degree of self-scorn for not being a person that had the same outflow of love as he had.  I wish I would have met Tammy Faye.

Tammy Faye was at one of the local casinos not too long ago making an appearance and signing her book.  She did an interview with a local radio station, they loved it and said she was a blast, and the local newspaper made it sound like a not to be missed event. Lots of hugs, people thanking her, lots of tears, lots of encouragement, lots of talk about Jesus. People loved her and she loved people.

Tammy Faye was a hope broker.  People with broken lives were drawn to her. Gay men listened as she spoke about sin.  Larry King leaned over and listened to her every word over and over. After almost every Tammy Faye interview, he would say, "Amazing!" She was a hero to her son. A broken lady that loved Jesus and moved through every difficulty in her life, while she continued to try and draw people closer to God.

If at the end of your life the Charlotte Observer - which was harsh to the Bakkers at many junctures in their life - says of you that you carried a message of "can-do Christian cheer" than we'll be able to say that was a life well lived.  You go sis!  I love you and am proud to be your brother!!

P.S. I am so glad I didn't do post number 100 on the midnight release of the new Harry Potter book - which I originally planned to do.  This is SO much more important than Harry Potter could ever hope to be!

Watch her on Larry King by clicking here

A great Sunday morning... than all God's children go home to blog:)
Visit my blog? With the verses you read still brewing in my mind, I wrote today's post.
I can't believe God loves to use us broken, broken, almost shattered people to do marvelous things. And that Satan is afraid enough of us to come after us. What a crazy plan.
To love like Tammy Faye...

Joe, I remember watching the PTL club together with you at Mom's. I always got a kick out of Tammy. She had a preciousness to her amidst her glam that you just couldn't help liking.

Her joy was incredibly evident in her last interview with Larry King. It was so hard to watch this woman known for her exuberance and flamboyance being so weak -- and yet her joy and faith in the Lord was crystal clear and contagious.

It was such a meaningful interview. She made me laugh when asked "What do you want to be remembered for?" and she answered, "Oh, my eyelashes" and laughed. And then said "No ... my walk with the Lord. I want everyone to know that there is great peace & joy in knowing Jesus Christ as your Lord & Savior." Awesome.

There was also a clip that made me weep ... Tammy said "I'm very grateful to the Lord for taking a little girl who had nothing to give ... but was willing to try."

"I trust Him with me," she said several times. What a sweet grace and simple faith she had. She loved Him. She trusted Him. Simple as that. She was truly an inspiration.

It was a good message this morning, Joe. Thanks. I can easily think of some of the whacky things I do because I am afraid of people. The message was as a balm to my soul...
The post about Tammy Faye was effective as an example of what love can do. Tammy Faye could have easily cowered in fear at the loss of support from the Christian community. Thankfully, she pressed on towards her calling and showed the Father's love to those that were in such need of it. This was a worthy post, Joe. Thanks again...

It's funny how often we define for ourselves what is acceptable to say and do;not necessarily based on scripture but on acceptance of the Christian community. We can get so uptight about (in over)our communication, and our testimony- to the point of it really being more about "our pride " masked as us giving God glory.
It becomes a fake script or role played out. The world has already seen that play a thousand plus times. Tammy dared to take it to the level of "reality" :), She didn't care if she looked like a fool at times as long as it was for Jesus.
A fool for Jesus is no fool at all!
I know pretty sad Proverb!! Right up there with -"On a bad day ,don't be mean."

I don't know.. I think that "A fool for Jesus is no fool at all is a great proverb!" WoW!

It was only recently that I started loving Tammy Faye and really appreciating her. Before that she annoyed me, but how many people have I annoyed in MY life?! I'm sure the numbers are great. I came to see Tammy Faye more of a kindred spirit - someone who just kept following Jesus, no matter what; someone who was persecuted by those who thought they were holier and judged when they didn't truly know her heart. How can any of us judge when we don't truly know other peoples' hearts? I see judgment as a leading sin in Christians' lives. I've seen people destroyed by the judgment of others. Jesus tells us to love one another - not to judge. Tammy Faye was a great example of that.

Hey Joe!
Sunday's outdoor service was beautiful. Good idea... glad it worked out. Visit my blog? My post entitled, "Blog Post for Dummies," is, in part, a tribute to 1st John.

How has you summer/fall vacation going?

Anyway, I got that book, I Was Wrong, from Amazon today and read the first 3 chapters. I actually couldn't get through the acknowledgments page without crying. Nothing like a heart full of repentence and gratitude, on its way to being healed (as healed as it can get this side of Heaven.) Thanks for the recommendation. I know I'll enjoy reading the rest.
And won't it be cool, in Heaven, to worship with Jim and Tammy Faye and Billy Graham and Ruth and all the people who hurt us in the past (and those we hurt)... with no pain, no conflict, nothing but perfect unity and love and purity.
See you there!

Joe,
This is a good post. I would ask you to consider putting something new up in its' place, though. We've been hanging out with Tammy Faye for about 3 months now.

Like so many Christians, I too laughed at Tammy Faye. Actually before I was a Christian, I used to smoke pot and turn on her show just to laugh at her as her mascara ran down her face. One day while watching, I prayed and repented of my sin and asked Jesus to love me and be my Lord. 31 years on and He has always honoured that prayer. How i thank God for directing my steps to hear the Good news of Jesus through Tammy. I have never looked back. I am always encouraged that the Lord can use anyone who makes herself available. Thank you Pastor Joe for the beautiful tribute to T.F.

This is just amazing! Thanks for reporting it.
By the way, in what sense is Tom Rob Smith a gay author?