RACE: The Power of an Illusion 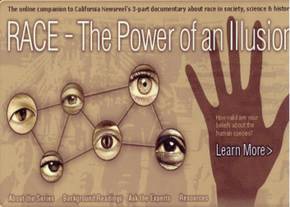 "Race: The Power of an Illusion" was the name of three part series on PBS, produced by California Newsreel in 2003.  The premise, and what they do a decent job proving it, is to show that there is no biological basis for race, but rather race is a social construct. People assume that because there are visible differences between people that there are huge biological differences, thus dividing us into various "races."  It is simply not true. The Bible alludes to this in the Book of Genesis an dis very specific in the book of Acts where they apostle Paul declares - two thousand years before modern biology - "From one man he made every nation of men, that they should inhabit the whole earth; and he determined the times set for them and the exact places where they should live." Acts 17:26

The Bible teaches us that all of humanity came from common ancestors, Adam and Eve. Although this concept has been balked at throughout history DNA is beginning to show the common ancestry of all human beings.  1999 news magazines began to publish articles about "Mitochondrial Eve" which represents "that woman whose mitochondrial DNA (with mutations) exists in all the humans now living on Earth."  The implications of both the television research special and contemporary discovers reinforce what we already know form the Bible, that we came from common descendants and all people are created in the image of God.

Human differences come from culture (ethnicity) and not biology. If you needed an organ transplant, it would matter little whether than organ came from someone from Asia, the Middle East, Africa or North America. Human beings are largely the same, except for minor differences in appearance.  Scientists have found that if you take people from anywhere in the world and match them with each other the difference between those two people wold be 0.2%. And the major "visible" differences (skin color, eye shape, hair) amounts to about 6% of the 0.2 percent.  People are people, created in the Image of God!

The concepts of the 'races" as we know it, comes more from the wickedness of the human heart (which always likes to think itself superior to 'somebody' else) and Darwinian evolution and social evolution than from known modern science. Evolution attempted in Darwin's day to show how the far the different "races" were from their original ancestors: apes. This viewpoint has lead to horrible human rights issues and even Hitler attempting to grow a "super-race" purified of all elements he found distasteful.  Moving away form the Bible has its consequences.

God loves all people, although not everybody loves God. This is our mission. To remind people (or tell them for the first time) that they are valuable, made in God's Image and that God loves them and does have a wonderful plan for their life!

The next time you find somebody or a group of people you don't like, remember you are related to them somewhere down the line!  That's probably why Jesus reminded us to love our neighbors as ourselves!

Its good to see this written out. In a world where we are all about celebrating our differences (which don't get me wrong are beautiful and God made) it is good to remember our common roots... and to remember that beneath all of our multicolored skin there is still a heart that is wicked and in need of major reform. Praise God that He loves us enough to make us beautifully diverse and still to save us all in the same way. How might is the power of the Cross!

Amen. Truth is a beautiful thing.

Joe, Andrew has your blog as his homepage. I've recently been made aware of an anti-Christian kids movie that's being released. Since your blog is so culturally relevant, I wanted to share the warning with you. This is a link of Christian commentary on the film, The Golden Compass