How Jesus Saved the Marriage of Alan and Denise Jackson 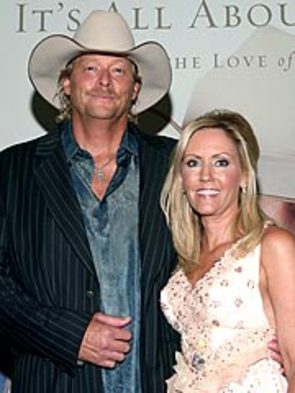 Country singer Alan Jackson’s wife, Denise, says:  “Yes, we have wealth, fame, fortune; from the outside we have it all.  But all that stuff does not bring joy, contentment, happiness or fulfillment.”  You can see their house in the video below called, "You Can Live in a House without Curtains," with lyrics that say, "but you can't hide the heartache inside."

They knew something of heartache.  They were high school sweethearts and married young. Alan became rich and famous and cheated on her.  In 1997 they separated.  But Jesus was going to come into the situation and change everything because Jesus is great at coming into hopeless situations and turning them around. And he did.  The result was a restored marriage, a new life and now a new book by Denise called, "It's All About Him (Jesus!)"

Here's a snippet from and Associated Press article about their marriage:

"NEW YORK (AP) -- Denise Jackson knew that her marriage to Alan Jackson wasn't perfect. She was too needy and insecure in the relationship, and he was on the road a lot, becoming one of country's biggest superstars. Denise Jackson's marriage to Alan Jackson was crumbling until she turned to God. Still, she wasn't prepared for the shock she got in 1998, shortly after the birth of their third child, when Jackson -- her sweetheart since their teen years -- told her that he didn't want to be in the marriage anymore. Hurt and disillusioned, she tried everything to get him back, and turned to prayer.

A revelation came one day when a friend told her she wouldn't pray for Alan Jackson to come back, but instead, would pray for Denise Jackson to become the woman that God intended her to be. From that day on, Denise Jackson began to reassess the role God played in her life -- and, instead of focusing on how to repair her relationship with her husband, put her efforts into rebuilding her relationship with God. In the end, she says, becoming closer to God helped her become closer to her husband -- and save her marriage."

Read an interview with Denise and Alan Jackson with Alan singing the song he wrote for his wife's book, "It's all about Him!"  Which is really cool, because his wife said it 'used to be all about Alan, and now it's all about Him (Jesus!)"

Here's a video of their home. Enjoy!

God is so amazing. He can come into any situation that seems hopeless, loveless, and heartless, and godless and turn it around for good.

I recently met a man who told me his story. He got a divorce from his wife, didnt see her for a few years, they both found the Lord seperatly, and remarried when they felt called back to each other. And now their love and their marriage is 100x times what it initially was. Thats God right there.

In my limited lifetime expierence, only being 21, I know that love is more than fuzzy feelings. It's a commitment. It's as much a contract with God as it is your spouse. In this day and age, we sometimes like to forget the "better or WORSE" part. But the amazing thing is, if we put our faith in Jesus, he can make the worst better!

every family has trouble, every heart has pain, right? But...Jesus.

This restored marriage is proof that God still does miracles. More amazing, is that they are willing to share their story. To be transparent together about their trials in today's world takes courage. May God continue to bless them and those around them.

who did he have an affair with, is she well known?
when was this?

Hey! Are you stealing my blogs?? Hehe :)

Oh! I was going to add "Great minds think alike", but we're both from the same family. How'd either one of us get a "great mind"? ;)

Joyce, O My I must have missed your July post.. I saw a clip on Fox Internet where they interviewed Denise. I thought I was on the cutting edge of teh news - and besides I had to get something up on my lagging blog- so... I guess it's actually old news, but it's good news and a great ongoing story...

It is a good story; regardless of when it was first reported. What an encouragement this story is!

No one truly knows how real God is and how good he is until they come to terms of who he is and who they are.He does make himself known if you truly seek and pray with all your heart.He will open your eyes through clouds of despair and find in your heart he truly does care. The choice to reject or accept God's ways will truly affect the out come of our own personal story called life.For life he made, choice he gave.Truly life, It's all about Him. Denise's story is worth the read,it truly touched my heart and soul.

Divorce is expensive! And who needs extra expenses these days?! Learning how to patch up a relationship is so important.

Are they still together? And where are they living?