Larry Norman Is Home With Jesus 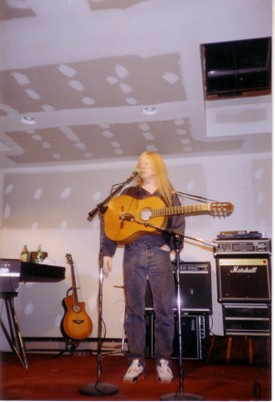 The first meeting we ever had in our main sanctuary was an evening meeting with Larry Norman. People got saved that night. The place wasn't even finished (as you can see from the picture) but the building inspector let us meet that night.

We've had him at the church several times performing and just attending. We arranged a pretty interesting tour of some of the Universities in New England with him and one of our church house bands that included Jeff Lecee on bass and Damon DeChaplain on drums.  We did an outreach that time at Battell Chapel at Yale and on one of the quads at Brown Universtiy. Beth Wacome (Keck) (another great friend!) opened up for him at Yale and his brother Charlie (who writes below giving info about Larry's death) was there as well that night. We had some trouble at Brown with the administration preaching the Gospel outside, but it all worked out and Larry did great.

Larry is considered the "Father of Christian Rock." Read the wikipedia entry about him here.  We'll have to play some of his music on the radio station this, so listen for that. I'm sure John Fogg will do a tribute to him.  Larry will be missed. He was a real innovator. Today Christian rock is pretty normal to a lot of Christian's, but Larry really was a forerunner in bringing rock to the church.  Listen to a powerful song and Larry reflecting on his own death by watching the video here. (This video features stills of Larry and other Christian artists that were contemporaries with Larry.)

Here's the note about Larry's death from his brother Charlie

Our friend and my wonderful brother Larry passed away at 2:45 Sunday morning. Kristin and I were with him, holding his hands and sitting in bed with him when his heart finally slowed to a stop. We spent this past week laughing, singing, and praying with him, and all the while he had us taking notes on new song ideas and instructions on how to continue his ministry and art.

Several of his friends got to come and visit with him in the last couple of weeks and were a great source of help and friendship to Larry. Ray Sievers, Derek Robertson, Mike Makinster, Tim and Christine Gilman, Matt and Becky Simmons, Kerry Hopkins, Allen Fleming and a few more. Thank you guys. Larry appreciated your visits very much. And he greatly appreciated the thoughts, wishes, support and prayers that came from all of you Solid Rock friends on a daily basis. Thank you for being part of his small circle of friends over the years. Yesterday afternoon he knew he was going to go home to God very soon and he dictated the following message to you while his friend Allen Fleming typed these words into Larry's computer:

I feel like a prize in a box of cracker jacks with God's hand reaching down to pick me up. I have been under medical care for months. My wounds are getting bigger. I have trouble breathing. I am ready to fly home.

My brother Charles is right, I won't be here much longer. I can't do anything about it. My heart is too weak. I want to say goodbye to everyone. In the past you have generously supported me with prayer and finance and we will probably still need financial help.

My plan is to be buried in a simple pine box with some flowers inside. But still it will be costly because of funeral arrangement, transportation to the gravesite, entombment, coordination, legal papers etc. However money is not really what I need, I want to say I love you.

I'd like to push back the darkness with my bravest effort. There will be a funeral posted here on the website, in case some of you want to attend. We are not sure of the date when I will die. Goodbye, farewell, we will meet again.

Goodbye, farewell, we'll meet again
Somewhere beyond the sky.
I pray that you will stay with God
Goodbye, my friends, goodbye.

Posted at 10:52 AM in Conversion Stories, Pop Culture | Permalink | Comments (5)

Wow!! what an amazing life lived for the Lord!! (rambled through his web site www.larrynorman.com )

Aw, I wish I could have been at Calvary then. God hadn't transplanted me yet though. This is lovely and gives such hope. It's funny. Everytime another brother or sister goes home, I start thinking about all the other people I know who are already there. The longer you live, the longer the list gets. And one day, we'll all be there. The music will be amazing, I'm sure. And perfect love. And unity. Gotta go find the Kleenex. Thanks Joe.

I was blessed in 1985. I actually had dinner with Larry Norman in a little place called the King's Place in Reynoldsburg,Ohio. I knew this family that left the Catholic church to follow through with a vision from the Lord. He showed them a building where people were praising God all the time. So they bought a building and opened it up to any Christian artist to come and play every Saturday night. No cover charge only a love offering. Before all the concerts, all the volunteers and the group that was playing sat down to a family style dinner and prayer. I was a conservative methodist girl sitting across from this man with really long hair and crazy blue eyes, wondering what he was going to do for all the people coming that night. When he sang,"You gotta watch what you're doin'", God spoke in that place. I will always be thankful for God saving a place for me at that table. Larry was amazing, and yes heaven looks better everyday because of the people that go before us! Thank you Larry for your obedience to the Kingdom of God, my life was impacted by you.

Hey, was that the time Larry said (after your message) "Nice job, Pastor, but you got it all wrong!"? Hahaha.

We'd like to welcome all fans of Larry Norman to join us at www.larrynormanpages.ning.com It's probably the best Larry Norman web site out there!