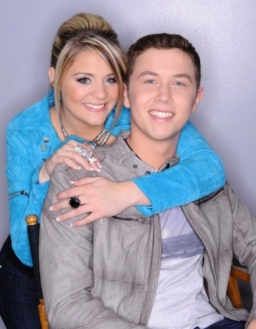 “I have to thank the Lord first, He’s the One that got me here!” was the first response of 17 year old Scotty McCreery when he won Season 10 of American Idol.  Scotty, who was never in the bottom three all season has been quite vocal about his faith.

People of faith are no strangers on American Idol.  Almost every season there are artists who are quite outspoken about their faith.   Jordin Sparks sang regularly in her church, Calvary Community Church in Phoenix, Arizona.  Jason Castro and Chris Sleigh, both contestants who were known for their hair now perform almost exclusively in churches.

It should come as no surprise that so many Idols are from the church, as the church has consistently filled the ranks of American popular music.   Since the early days of rock and roll the church has provided a fresh crop of singers.  From the spirituals of the slaves, to Elvis Presley who learned to sing in a small Assembly of God church in Mississippi, to Marvin Gaye and Aretha Franklin who had preachers for fathers to Bono from U2 who has been clear and active in speaking of his faith the church has continued to produce a fresh crops of singers.  Scotty is no exception to this and has sung in his own church, First Baptist in Garner, North Carolina. Prior to winning Idol Scotty was active sharing his faith and went on mission trips with his church.

On Scotty McCreery’s American Idol page he lists his favorite quote as “I can do all things through Christ who strengthens me.”   When Scotty sang ‘Gone’ and hopped off the stage Steven Tyler told him, “Scotty my man, you know up until now, you've been a Puritan, but I swear to God I saw you dance with the devil tonight!” To which Scotty replied, “I love Jesus!”  Randy told him later, “I don’t know about that dancing with the devil thing!”  Under Scotty’s Q & A on the American Idol page when asked, “What was the proudest moment of your life outside of American Idol?” Scotty responded, “Letting Christ in to my heart.”

A few ladies that I know from church, Calvary Chapel in Uncasville, told me they want their daughters to marry Scotty.  Why not, he’s the whole package. Young, a good guy, soon most likely to be rich, comes from a strong family and has a bright future in front of him.  Some people are wondering however what’s going on with him and Lauren Alainia, his competitor right down to the wire. His statement that he and Lauren would be together for a long time. Him saying, “Baby I love you!” when winning the competition. She kissing him profusely upon his winning the competition have people talking.  All of that for another day.  Scotty has won it and attributes it to God.

This article was origainlly written for and appeared in New London Patch on May 26, 2011

I really hope he'll keep God as his top priority. I'd hate seeing him going down the road of those who turned their back on Jesus once they tested fame.