My wife asked me who the Christians were on the Super Bowl teams. I put this together for her, but you get to look in!  How good a deal is that!?! So here you go! There are a load of athletes that love Jesus.  Here's a list and brief bio on some of those in this year's game. Which, regardless of you were screaming for (and the game was a screamer!) it was one of the best Super Bowl games in LONG time!

Palamalu told CBN, "I think that what Jesus brings to my life is peace in whatever happens in my life. Whether I face a huge injury, whether my career ends tomorrow, whether I make a bad play and I'm criticized by everybody. To accept whatever Will that He brings into my life, and to deal with it, and have Him deal with it for me"

...comes form Baylor University, the same college David Crowder attended when He helped start University Baptist Church. Sepulveda, speaking of rival quarterback Kurt Warner said, "Every time I hear Kurt Warner talking about his faith, I'm saying 'Yeah, give it to them.' It inspires me to hear guys like him who are willing to share. The joy of the Lord is on them. He's not on my team, but we're on the same team all the time."

started playing when he was a senior in high school. Going into Super Bowl week he said, "I want to give God the glory this week, not man!"

said that recently the book,"The Samson Syndrome" has really spoken to him as he is battling along with his son, Elijah who is five years old and has leukemia.

when asked by reporters the key to success, he answered, "For God so loved the world that He gave His only begotten Son that whoever believed in Him would not perish, but have eternal life!"

..says, "Let me tell you, God is so good. He has blessed me beyond my imagination. I personally would never have thought that I would be here at this time, considering the things that I have been through in this game."

From the team I wanted to to win, the Arizona Cardinals (although, why is a desert team called the cardinals?) comes:

Of his faith, Boldin says, "That's just who I am; that's just my faith. No matter what goes on in my life -- surgeries, injuries, hard times or whatever, I'm a man of faith and I believe that's one of the reasons I am here today.. My faith is what keeps me grounded."

And then of course there is Kurt Warner

Here's some material that is based upon his book "All Things Are Possible."

"It's been called the "greatest single-season sports story in history!" The St. Louis Rams began 1999 with the worst record of any NFL team in the 90s. At the end of the year, they were competing for the Super Bowl. Even more remarkable was the Cinderella story behind their superstar, Kurt Warner. Just five years earlier, desperate for money to support his wife and children, Warner had worked the night shift at a supermarket--stocking shelves for minimum wage. Now, as the Rams' starting quarterback, he led the team all the way through their "miracle season" to the pinnacle of professional football. There were more than 72,000 fans in the Georgia Dome and a staggering 800 million watching on television. With two minutes and five seconds left in a tied game, Warner threw the touchdown pass that earned him the title "MVP--Most Valuable Player" and "Super Bowl Champion."

It was like a real-life fairy tale, a dream come true. But Warner didn't seem too surprised:

"I believe that the Lord has a plan for each of us that's better than anything we can imagine--even if that plan isn't obvious to us at every stage. He prepared me for this over a long period of time--in lower-profile locker rooms and the grocery store and in Europe, through all the personal tragedies and in spite of the people who doubted me along the way," Warner explained. "Whether I'm a Super Bowl Champion or a regular guy stocking groceries at the Hy-Vee, sharing my faith and glorifying Jesus is the central focus of my time on this earth. And the fact that I now have a podium, I believe, is no coincidence. I want to be a role model for Christ in everything that I do. Living my life for Him and showing people the beauty of that reality is my mission in life."

Kurt admits that glorifying God hasn't always been his priority:

"Before I could devote my life to Jesus and start living my life for Him, I had to go through a lot of personal struggles, including a period a few years ago where I got a little caught up in things that aren't important--fame, money, lust...."

Warner suffered a series of disastrous setbacks in his career. He faced financial problems, family problems, even the sudden and tragic death of his wife's parents. All the hurts and the heartbreak caused Kurt to take a good hard look at his life--and what was missing from it. "Growing up I'd always put my life on one side and my relationship with God on the other. I knew God was there, but I only called upon Him when I needed Him or felt compelled to thank Him. Eventually, I realized I needed to live every day for Him."

Warner says he's grateful he had the opportunity to get his priorities straight before he experienced his NFL success. "I realize now that I would not have been prepared for my big chance had it happened before it did." Kurt's faith in Christ has given him the peace and strength he's needed to handle all the challenges that have come his way.

Immediately after the Rams' victory at the Super Bowl, an interviewer began, "Kurt, first things first--tell me about the final touchdown pass to Isaac."

Kurt responded, "Well, first things first, I've got to thank my Lord and Savior up above--thank You, Jesus!" As he later explained, Kurt meant no offense or disrespect to the reporter.

"I just wanted to use the opportunity to point out that the Lord does come first in my life, and I'm not shy about sharing that with the world. I'm a man who is driven by faith, and any power or peace I feel -- on the football field or otherwise--is because of my faith and my relationship with Jesus."

The Bible says that "If you confess with your mouth Jesus as Lord, and believe in your heart that God raised Him from the dead, you shall be saved" (Romans 10:9 NASB).

"Jesus changed my life, and He can change yours too," Kurt Warner says. If you want to experience the peace and joy that come from having a personal relationship with Jesus Christ, you might pray Kurt's prayer:

"Lord Jesus, You know everything about me. Please forgive me for all the wrong things I've ever said or done. I know that You died for my sins and rose from the dead. Please come into my life and be my Lord. Help me to follow You always. Amen."

Based on the book All Things Possible © 2000 by Kurt Warner with Michael Silver. Used by permission from Harper Collins Publishers, Inc. 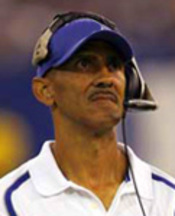 Here's a story about Tony Dungy and his sons suicide that appeared on this blog when I first started it.  It's worth reading again. ESPN.com did an amazing story about Tony Dungy, coach of the Indianapolis Colts. The story revolves around Dungy's faith in Christ and how it has sustained him through the most difficult period of his life. The death, ruled as a suicide, of his 18 year old son, James, in December of 2005.

Suicide is so difficult to deal with. Often those who are left behind blame themselves or wonder what they have done wrong.  Suicide strikes in families of all types.  As humans none of us are beyond the despair that can cause us to wish we were no longer alive.

Listen to what the apostle Paul said, 2 Corinthians 1:8 "We do not want you to be uninformed, brothers, about the hardships we suffered in the province of Asia. We were under great pressure, far beyond our ability to endure, so that we despaired even of life."

What? The apostle Paul despairing of life?  Most of us don't think of Paul that way, but none of us are exempt from despair and hopelessness.  After a great victory against the prophets of Baal on Mount Carmel, Elijah demonstrates symptoms of depression (see 1 Kings 18.) Nobody is exempt from depression and despair.

The article is a great encouragement of how one father in the public eye and spotlight is coping.  ESPN named the article "Amazing Grace." Read it here.

A link farm of sucide realted organizations and articles can be found here.