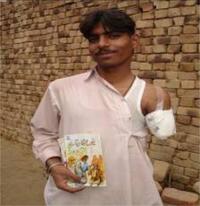 Radical Muslims cut off Mohan Shahzad’s arm with an axe after he refused to stop selling Christian literature.  Even so, he says he will continue to build the Lord’s Kingdom, even if his persecutors cut off his other arm.

Pray Mohan’s brave testimony will demonstrate the strength that comes from a relationship with the Lord.
For more information on the persecuted church visit:

Voice of the Martyrs

Afghanistan is at it again.  Some remember when Heather Mercer and Dayna Curry were rescued by U.S. Special Forces in November of 2001, after they had been taken captive by the Taliban.  Mercer, after her release, said it wasn't the Taliban that imprisoned her, but that God had used it and her to spread His message in that country under spiritual bondage.

Now, Afghanistan is at it again.  This week (Aug 4, 2006) the Afghan government, under Hamid Karzai, deported 1,200 Korean Christians, because they were "seeking to undermine Islamic Culture."  The new measures to rid the country of Christians and Christian influence comes as the government there is reinstituting the Vice and Virtues Ministry, which was a symbol of the repressive Taliban regime.

This is a picture of some of the Korean Christians that are being deported because it is feared they were trying to convert people to Christianity.  The crime of these Christian relief workers, according to a Herat police officer, is that one read a religious reading out loud and another played a song. When the officer was questioned as to what it was they read and sang, he said he didn't know because it was in Korean, but it was "kind of religious."

Many will remember the pictures, like the one above, of Afghan women under the Taliban regime.  Woman were not only mandated to dress in this way, but suffered many other restrictions, such as prohibitions against dealing with male shop-keepers.  Other difficulties imposed on woman by the Taliban included:

(1) Complete ban on women working outside their homes, including teachers, doctors and engineers.  (2) Complete restriction on women's movement outside of their houses without a mahram (father, brother or husband).  (3) Ban on being treated by a male doctor.  (4) Ban on studying at school, university or any other educational institution.  (5) Compulsory wearing of a long veil (Burqa) which covers women from head to toe. (6) Whipping, beating and verbal abuse of women whose Burqa is not worn in accordance to Taliban rules. (7) Whipping of women in public for having non-covered ankles. (8) Public stoning of women for having sex outside marriage (a number of lovers are stoned to death under this rule.)  (9) Ban on all use of make-up (a number of women's fingers have been amputated for having painted nails.)
.
Pray for Afghanistan. Pray for the brave Christian workers like Heather Mercer and Dayna Curry, that have risked all to tell people about the glorious message of freedom in Christ. That the truth still sets us free. Men AND women.
.
If you would like a free CD of Heather Mercer's testimony, go to our church website www.revelation320.org and send us an email asking for one. We'll get it right out to you!
.
Keep your eyes to the sky, your feet on the ground and your heart with people.  and additionally, keep your nose in your Bible and your thumb in the newspaper.